Friendlies From Leavenworth to the Tetons 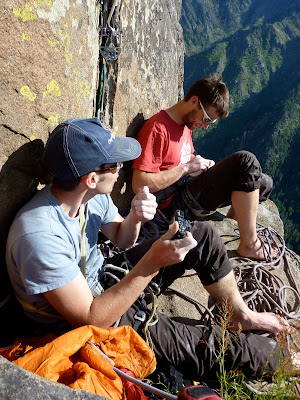 Jens and Max on the perfect ledge below ROTC crack on the recently opened Midnight Rock. 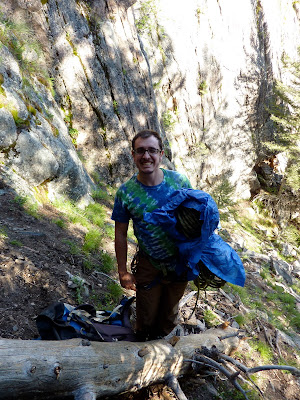 Ty and Matt sicking me on the Gallatin Canyon's best cracks. 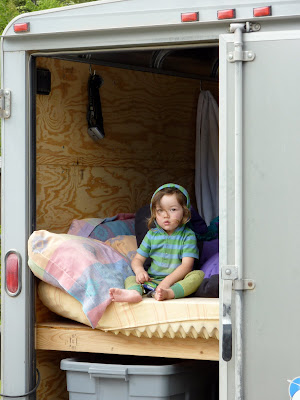 Family Life in the Tetons 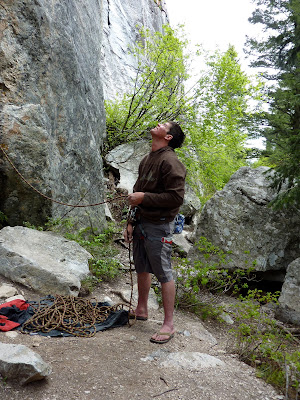 Mountain Corn putting the high hemoglobin count to good use in Teton Canyon. 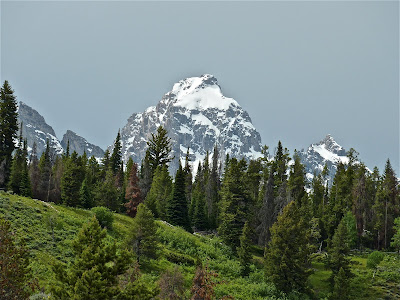 Grand times!
Neil recently started work on the East Side of the Sierra. However, he was able to lead all but two pitches of the Nose before committing to the grind.
The drive down from Washington was augmented with good company and climbing in Montana. The Yellowstone Ecosystem serves it up. The top of the food chain is not humans down here...
Posted by Joel Kauffman at 6:56 AM No comments:

After a day of snow followed by a day to clean off the snow, Raphael and I set our sights on a route named Bacon and Eggs. Upon correspondence with Eammon, we realized that we climbed a route just right of the aforementioned. The name for the possible new line, "Vegetarian Couloir." The appeal of this route is it's proximity to Kahiltna, BC. We completed our mission in 9 hours camp to camp.
The route enters the mixed looking right facing corner to gain the East Ridge of Begguya. 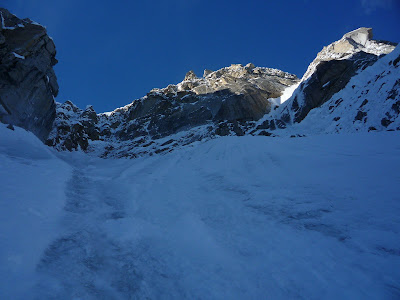 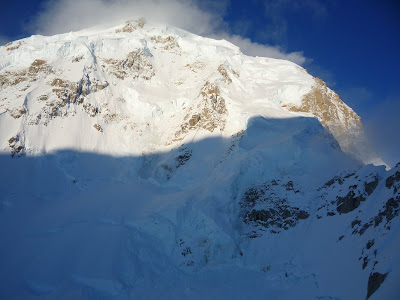 We enjoyed a classic Alaskan style top out. The unconsolidated snow provided good "swimming" as Raph put it and definately increased the pucker factor and the overall commitment of the route. 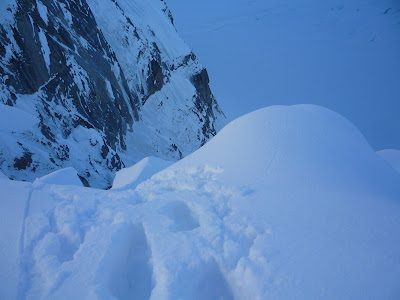 Raph on the East Ridge of Begguya (aka Mt. Hunter), known to the natives as Denali's son. Huntington West Face is in the background reminding us of unfinished business. 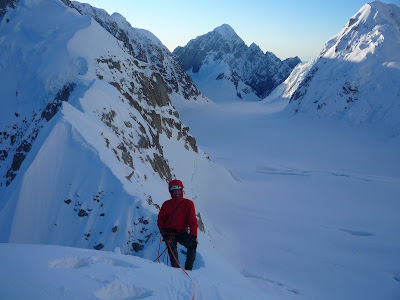 Check out Raph's blog
Looking down the weakness. 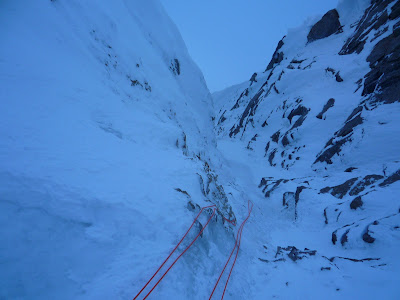 Raphael contemplates the best way around the corniced ridge 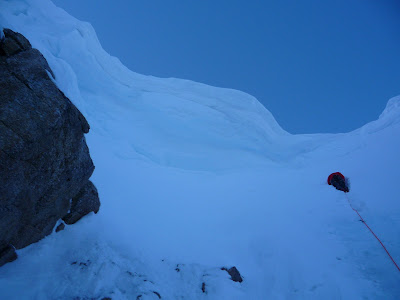 Looking toward BC with first light on Sultana, which is Athabaskan for Denali's Wife (Mount Foraker). Sultana is North Americas 6th highest mountain at 17, 400ft. 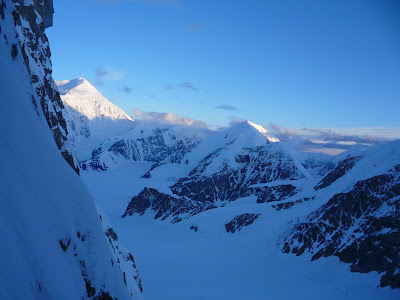 Ice from the Triassic Period warmed us up for the main event. 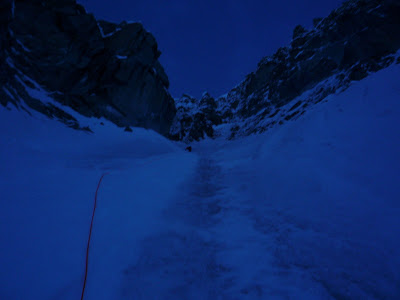 The clock starts when one crosses the schrund. 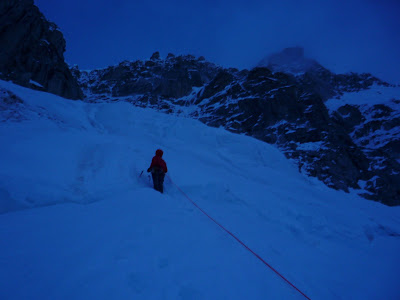 The Moonflower Buttress is the obvious striated granite wall in the center. The Mini-Moonflower climbs the tower just to the left, and the Mini-Mini-Moonflower (aka Bacon and Eggs) is just a little further left. 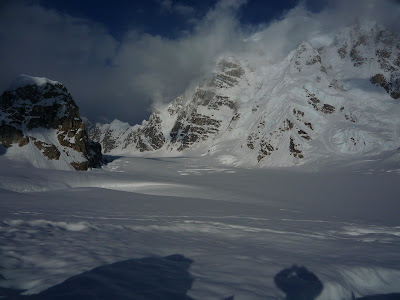 Rock climbing close to Kahiltna BC. Sam reaches for a chalk bag that doesn't exist. 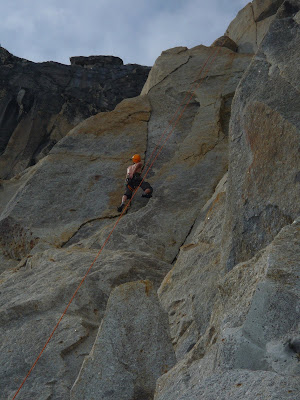 The Columbian-American Expedition to Little Switzerland was a total success! Andres and I stocked up on calories in Talkeetna, Alaska for a few days before flying onto the Pika Glaciear. We were on the super-chill program.
The hot daytime temperatures and low elevation forced us to adopt the night schedule. Most days we slept in and left camp around 1700. The freezing started just before mid-night or day-end as it should be called in Alaska near the solstice. 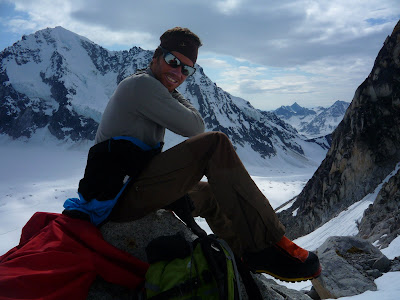 The Pika glacier joins the lower Kahiltna glacier around 5,000ft. Water pools in the depressions of the glacier. A reminder of what awaits at the bottom of some crevasses... 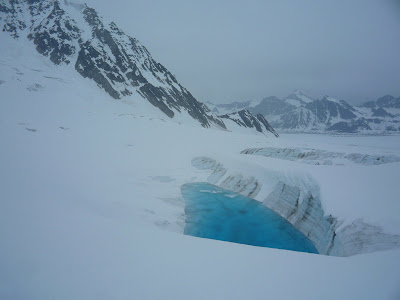 Andres shows us how to schralp, Columbian style. 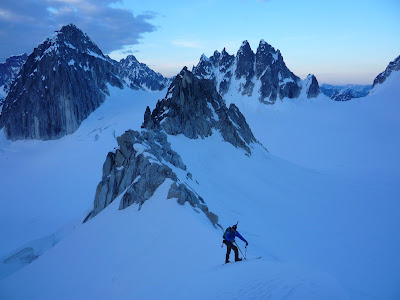 When the snow clears off the face of the North Pillar, there will be good climbing... 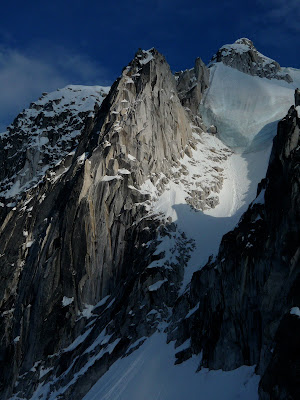 Many projects await the adventurous. 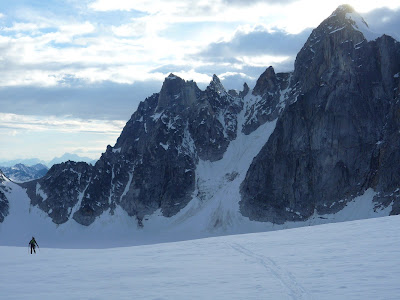 The North Pillar of the Crown Jewel is illuminated on the left. 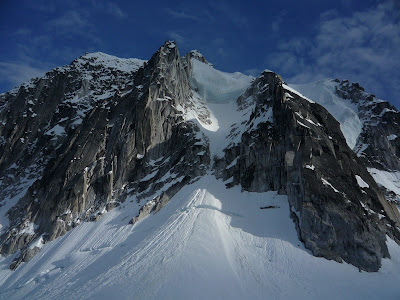 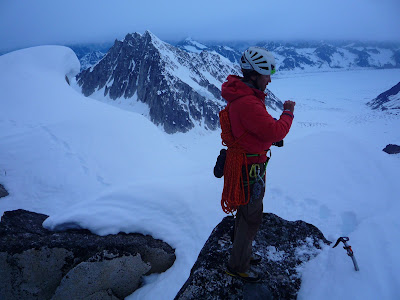 Andres walks the final ridge to the summit of the Throne after simul-soloing
III 5.8 Lost Marsupial. 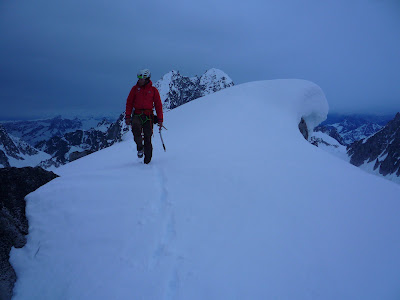 Peering over the edge with the Royal Tower on the right. The ridge just left of the central cooler weakness is IV 5.10a. 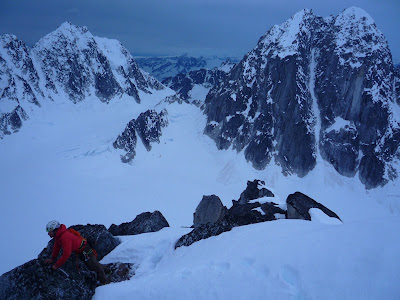 Mixing things up a bit... 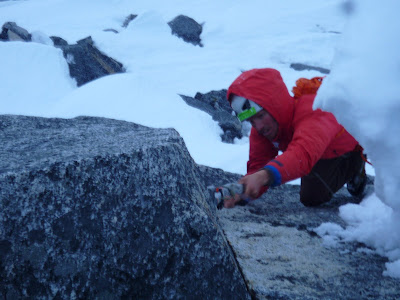 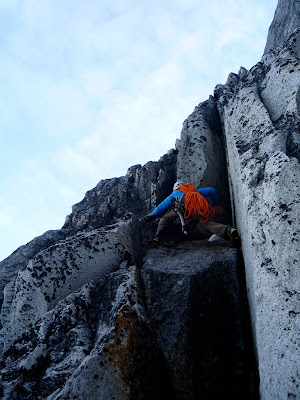 We practiced the art of boots into rock shoes on snow! 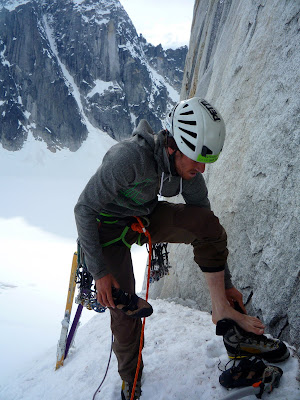 Posted by Joel Kauffman at 11:34 AM No comments:

(Photo courtesy Mountain Film)
After another great trip to the Black Canyon with Kim Havell, I've been resting and enjoying Telluride's Mountain Film Festival, a incredible four-day event combining adventure and environmental issues.The Sender film boys were in town showing some of their latest; 'Alone on the Wall' made my palms sweat as I watched Honnold re-enact free solos of Moonlight Buttress and Half Dome, awesome footage! This film won the festival's Charlie Fowler Award. 'Man vs Eiger' (AKA Fly or Die) documented Dean's quest to Free-BASE Deep Blue Sea on the Eiger North Face; this guy is a true scientist, experiencing the world in highly acute mental states. On the enviro front, I really enjoyed "I Am", a film documenting a Hollywood producer's journey to shun the false material world and find true meaning in this confusing world. Mountain Film leaves you feeling disturbed and also inspired to change what you can.
http://www.senderfilms.com/
http://www.iamthemovie.net/
http://www.mountainfilm.org/

Check out Kim Havell's site for the Black Canyon Trip Report
www.havelltravels.com/2010/05/tr-black-canyon-classic-days/
Posted by Neil Kauffman at 9:24 AM 2 comments: