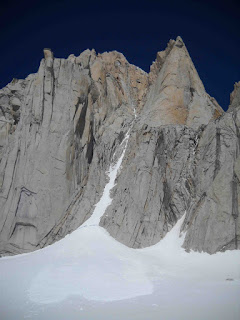 Supercanaleta remembered...
the snow and ice you can see is about 1000m,
the route then exits the couliour right onto rock, gaining the ridge, 600m to the TOP of Fitz Roy 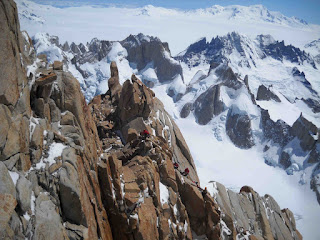 The crew on the upper ridge of the Supercanaleta
Joel, Santiago, Luis, Neil, and Jim
. 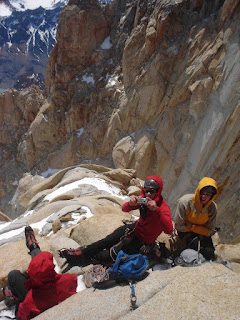 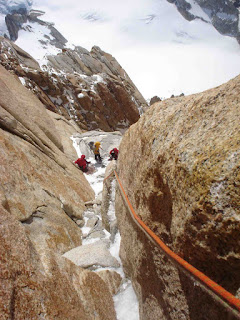 The Gringos waiting on the upper ridge... 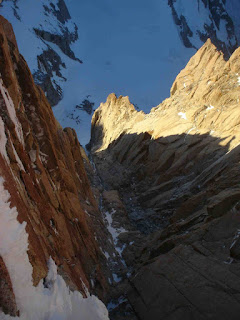 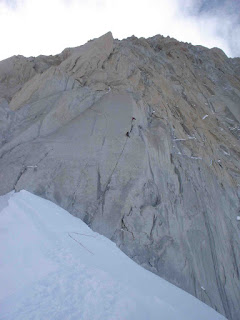 Jim on the last rappel off the Franco-Argentine route 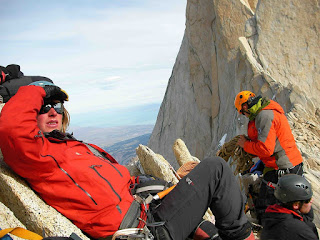 Relaxin on the Brecca de los Italianos, after rappeling the Franco 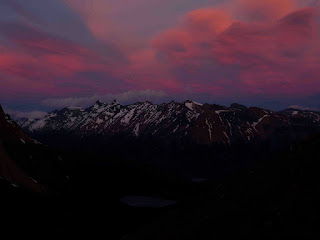 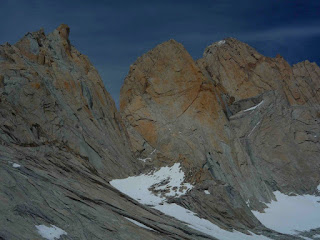 West side: Guillamet, Mermoz, and Fitz
Splitter cracks are on the radar... 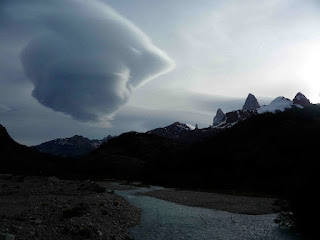 A ghost, a bird, what do you see?
The rock towers are...
St. Exuperey, Innominata (little one (relatively)), Poincenot, and Fitz Roy

It's raining in Patagonia. Today is the solstice, which means about 18 hours of light here at -49 degrees south. Conversations have become pretty interesting among the Gringos as we mob between panaderias, restaurants, and houses. This is a necessary phase as the hunger builds and builds until you can no longer contain your energies, then wait some more...maybe there is a climbable weather window coming in a few days, perhaps it will once again change.
The challenge is maintaining the physical ability and mental psyche during the down time. We've been good boys, maybe a Patagonian Christmas present?
Posted by Neil Kauffman at 6:23 PM 2 comments: 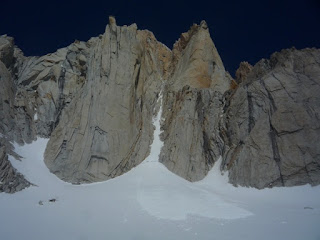 The West Face of Fitz Roy and Supercanaleta 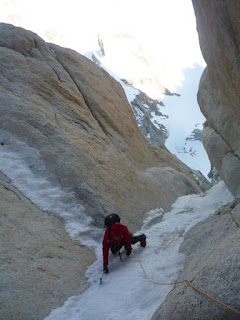 Me climbing a great ice pitch 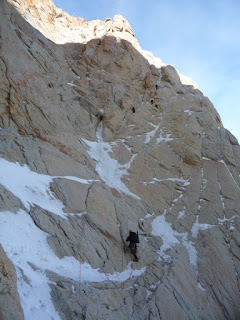 The whole crew, traversing out of the couloir 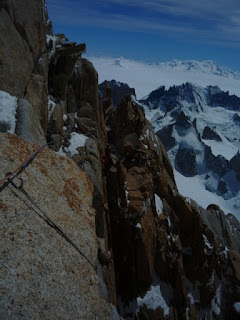 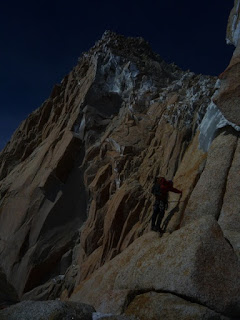 Luis on the ridge with the summit behind 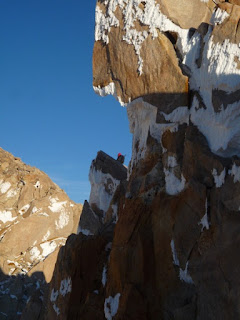 Looking along the ridge at Luis 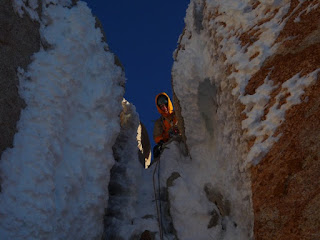 Jim led an interesting rime chimney on the ridge 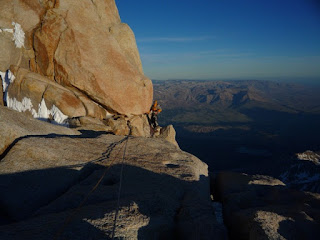 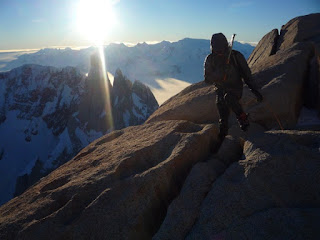 Me finishing the ridge terrain 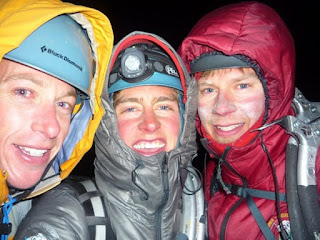 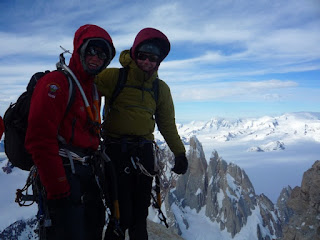 This is the summit of Fitz Roy!!! 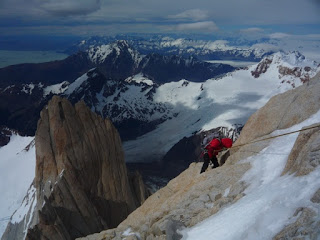 Rappelling the Franco with Poincenot behind Jim 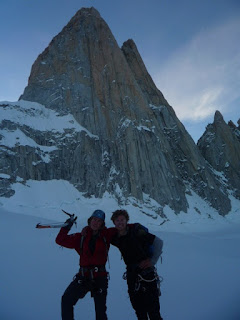 Los Hermanos
the Italian Bench is the snowfield on the left, the Franco starts there and takes the left skyline
Supercanaleta climbs the other side of Fitz 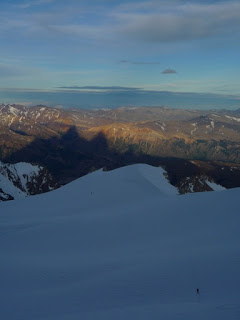 The shadows of Fitz Roy and Poincenot 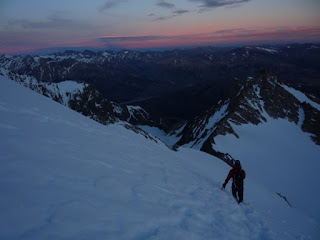 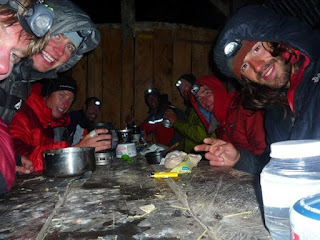 The Supercanaleta crew at the Rio Blanco Hut, 1am?

Joel and I are back in El Chalten and the splitter 7-day weather window has just closed on the Fitz/Torre Massifs. No doubt there has been a flurry of activity between here and the Torres del Paine to the south. After 3 full days of travel from the USA, we arrived in this rapidly growing tourist town in Southern Patagonia to an extraordinary scene: perfectly calm blue skies and a stable forcast for the foreseeable future. Our new friend Jim Turner was partnerless and psyched to climb the Supercanaleta route on Fitz Roy, we were psyched to have him on board as another strong ice and mixed climber who has been dialing the skillz living in Ouray, CO.

We spent one day resting in town and getting our gear together, then launched the adventure, taking a taxi to the west side of the Fitz Roy Range. After hiking through lush beech forest along the river, we gained elevation to Paso Cuadrado and entered the snow level under the imposing west face of Fitz Roy. Along the way we met two groups of our Argentine friends also heading to the route, this was definately the time to tag the ¨SuperCouloir¨ as it often melts out quickly during good weather.

We rested at the base for a few hours then started up the snow cone at 1130pm. The climbing was mostly steep snow but fortunately an earlier team had kicked steps in the couloir. We cruised through short steps of ice interspersed with more snow terrrain for a few hours, then got into a rock and mixed ice variation that slowed things down as we roped up. At this point the teams behind us took the easier path and passed, doh! We rejoined them as the route exits the coulior and climbs rock terrain for a few pitches. As one team was moving slowly, we ate food and brewed soup with the Jet-Boil as the sun rose. Re-energized we started climbing again through some awesome rock and great ice pitches! We bottlenecked again and waited for the teams to thin out; we tried passing on a variation to the left but still rejoined the other teams . At this time we had reached the upper ridge of the route where the California route joins. This section has amazingly exposed rock climbing high above the entire ice cap with unreal views of the land of snow, rock, and ice. After more waiting, we finished the ridge terrain and made a short rappel to the upper part of Fitz Roy, truly a trippy place to be as the sun was setting at 10pm! We scrambled over moderate snow and ice for another half hour and found or amigos preparing to bivy in a somewhat protected area near the summit. We tagged the top at around 11pm making our journey upwards close to the 23 hour mark.

So what do we do now? Its dark, we are on top of a giant mountain, and we have never been on the Franco-Argentine route, which is the standard descent off the east side of Fitz. The answer is....put on all yer clothes and bivy near the top of Fitz Roy with no sleeping gear, we had brought a tent fly and had the Jet-Boil, nevertheless, sleep was hard to come by!

We stirred at 7am as the sun hit us, yes! The whole crew went back to the top to revel in our achievement, the weather was still great but seemed to be changing as clouds rolled in off the ice cap. But as everyone knows going up is only half the climb. We were apprehensive about rappelling the Franco, but now had one person who had done the route before. We teamed up and left the top at 8am, the gringos brought up the rear pulling the ropes and delivering to the team in front. It all went pretty smooth and most importantly no stuck ropes! We made it off Fitz Roy and onto the Italian Bench and gathered some energy. A sick place to be!
At this point our friend Manuel¨who lives in town aks Jim ¨How many times have you been to Patagonia?¨Well this is my first time here!¨¨Fuck you!¨A lucky charm??? 5 more rappels brought us onto the glacier, psyched!!!! We hiked through deep snow to Paso Superior, the base camp for this side of the mountain, it was odd to see other climbers after two full days on Fitz Roy. Now its dark again and we are still hiking down, down, down. We made it back to Chalten about 3am and had to celebrate with some cerveza, crazy enough the bar is still open and there´s only two people there! We swill some booze and we´re all totally wiped out, delerious. We make it back to our casita and eat a few eggs, the pass out for a long time. When we wake up, the weather is still splitter!

Today is day four off, and we are feeling strong! However, the weather has temporarily shut down today (finally!), possibly looks okay for the next couple days, so we are heading back to the hills!

Climbing Fitz was an incredible experience none of us will ever forget!
Posted by Neil Kauffman at 7:33 AM 8 comments: