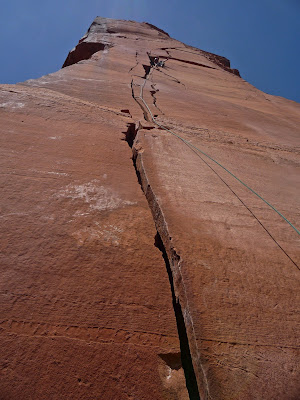 Dave Elder and I had only been reunited for a few minutes when our collective conscience re-hatched the idea. Sacred Space. The discussion that ensued around the campfire was carried out in reverent undertones. "Isn't the original start 5.9X?" "How wide is the squeeze?"
A mandatory rest day preceded our attempt. 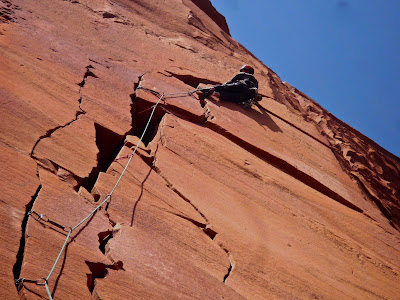 Dave leads the crux Off-Width, which involves liebacking the outside edge of an offset 6" crack. It's possible to get thigh jams with the left leg. The belay for the squeeze is ten feet to Dave's right. The Kayenta layer on top of the King of Pain has been eroding for some time and a lot of this less resistant layer ends up on this crux traverse and at the bottom of the squeeze, the location of the anchors (two bolts). 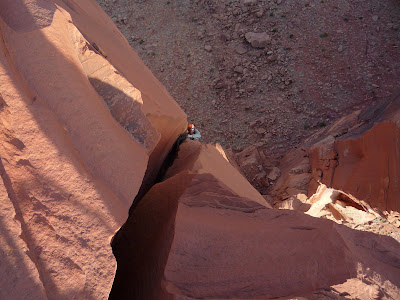 Dave follows the last bit of steep squeeze. The consensus is that it's a 5.11 wide right off the belay. Not easy to get into, not easy to stay in. The first gear is a purple TCU in a horizontal at 20ft. Further up, two tipped out Green Camalot's (#6's) do a poor job of inspiring confidence. Bro's are the only way to protect the upper bit... This is the second time (first time on lead) I had to enter a Sacred Space to continue. 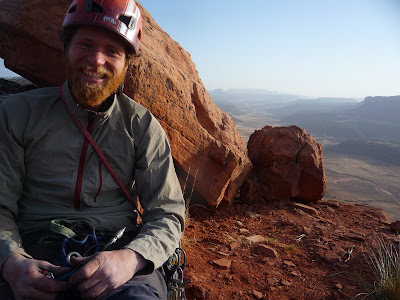 Dave and I reveling in the Cumbre Moment after having completed the jump-across from the South to North summit of King of Pain. The photos do a poor job of revealing the constant 20mph wind out of the Northwest. Dave waited for five minutes for the wind to die while attempting the jump. There was no reprieve until he was on the other side... 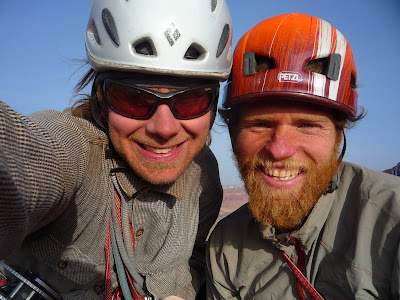 Huge thanks to Dave Elder for being super psyched and engaging the Enemy with me!
Posted by Joel Kauffman at 3:04 PM 6 comments: 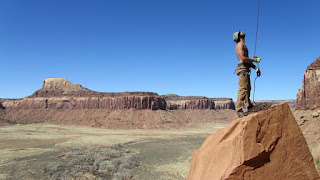 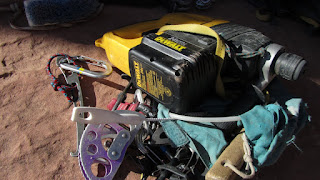 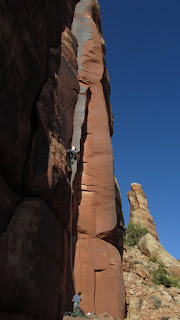 T-Bow FA of Twitterpated
H to the K on belay 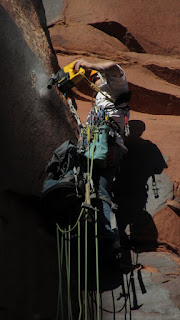 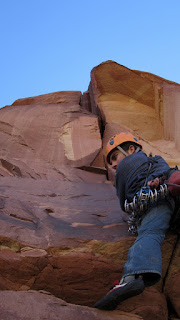 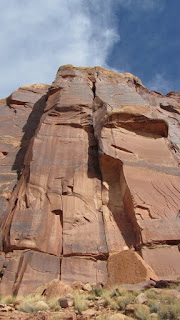 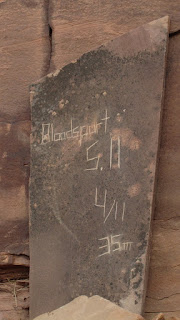 Indian Creek is fun, lots of fun. I've been climbing with my good friend Trevor Bowman, a Wyoming boy with a taste for drilling new routes. So far we've put up Montana Gangster at Scarface, Twitterpated at Donnelly Canyon, and Bloodsport at Left Rambo. These routes are all about 5.11 and definitely recommended if your looking to avoid the chalkdust torture of the standard Creek 'classics" and find some nice crispy cracks. Get some!
Posted by Neil Kauffman at 5:39 PM 1 comment: 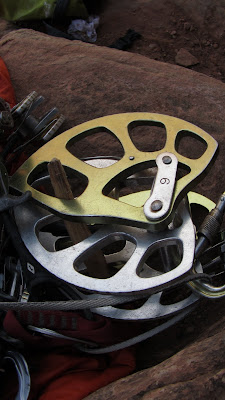 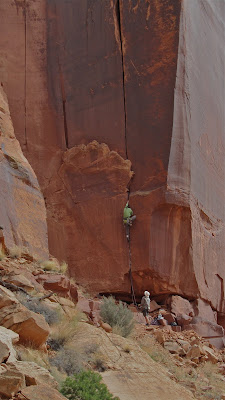 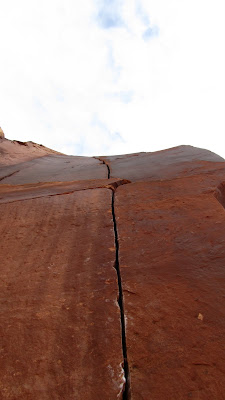 The crack only looks the same size because it's foreshortened. In reality, this poddy start is purple and green camalots and the upper 120ft. is #4's. Alex Stroud photo. 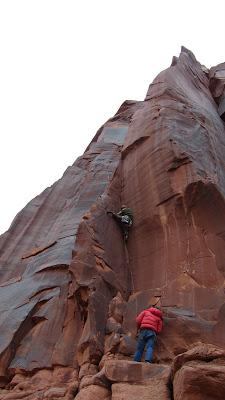 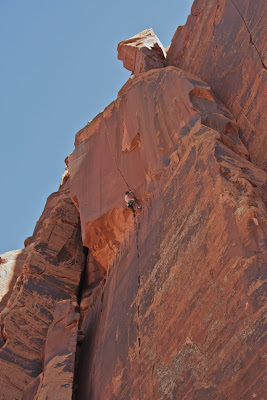 Hayden committing to overhanging on Broken Brain. Alex Stroud photo.
Lots of friendlies around the desert this time of year. We were psyched to be joined by Hayden and Michael for some soul crushing HARD leads and epic stories, respectively. Thanks for the brilliant company!!!
Posted by Joel Kauffman at 5:23 PM 2 comments: