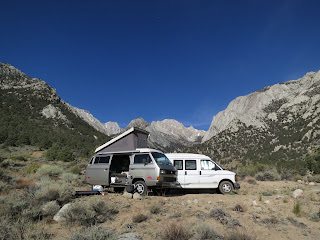 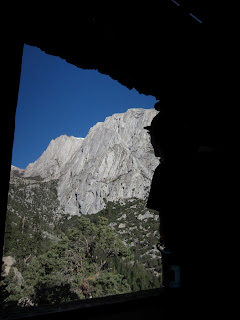 South Face of Lone Pine Peak from the Stone House 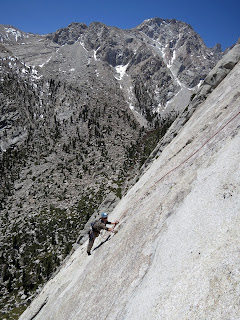 High on the MSMR, with Mt. Langley behind
(Eric Harz photo) 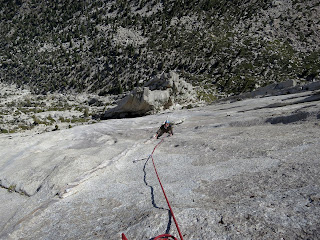 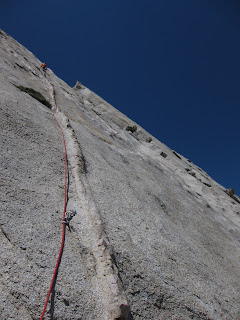 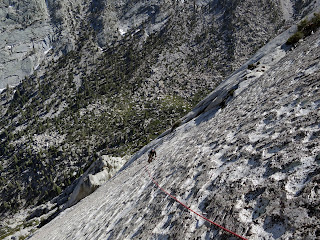 Eric scramblin' on the Wheeler Crest, over the Owens Valley 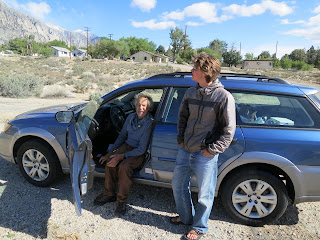 Kickin' it with Beckey outside Rovana
(Eric Harz photo)

I met Eric in a tiny brick house next to Radio El Chalten in 2008. It was probably raining, or at least pretty windy, so the modest abode was a luxury upgrade from the tent Joel and I shared down the street and across the river. The window leaked badly when it really came down and soon a puddle oozed across the tile, threatening my dry pad position on the floor. Eric grabbed the shower squeegie and corralled the slime out the door, literally saving my ass. Over the next few months, Joel, Eric, Felix, and I became great friends, the kind made by living in a man-cave with two sets of bunk beds, no windows, and plenty of bad weather.

Arriving in Cali for the season, I flipped through my contact list searching potential partners. Eric is a geologist, and a proud new home owner in Santa Barbara, mere hours from my location on the Sierra East Side. As usual, he's psyched to ditch out of SOCAL and find some adventure in the 'pine! I rallied my van as far back as reasonable into the Tuttle Creek drainage and Eric showed up hours after sunset fueled by delicious Olympia!

It's a sandy slog to get back to the South Face of Lone Pine Peak, but it's a scenic slog and we caught up along the way, chatting about California Girls back in SB. We imagined Fred Beckey and Eric Bjornstad doing the same back in '70 when they put up the Direct South Face, a huge route that made his '100 Favorites' list.

Well times have certainly changed, the Michael Strassman Memorial Route went up in 2008 and climbs a wild 'Super Dike' for 500 feet of mind-melting friction along the smooth, white, andecite streak. It's bolted, but definitely not for sport wankin'! After 6 pitches you can rappel or go BIG and continue to the cumbre.

After some quality R&R in SB, Eric and I returned to the desert on the tail of a snowstorm leaving the Sierra nice 'n crispy! After a valiant effort of trying to convince me that Mt. Mendel was the thing to do, Eric conceded and we went rock climbing, in the sun, on the Wheeler Crest. This enormous upthrust of granite forms the Sierra escarpment as you grind up the Sherwin Grade climbing out of Bishop. I'd always been allured by those crazy distant towers, a little push from a friend in Rovana was all it took to get going. After a few hours of sagebrush whacking we excitedly put on rock shoes and scrambled up a wall of incredible red patina while bumping tunes, taking in the huge views, and smiling big!
Posted by Neil Kauffman at 5:12 PM No comments: