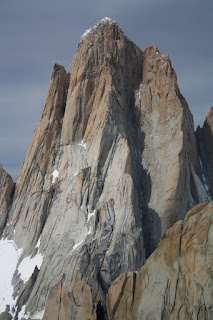 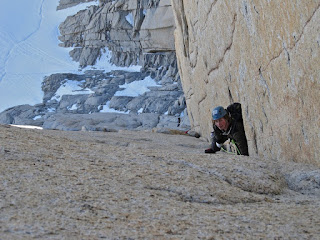 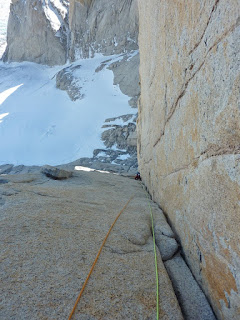 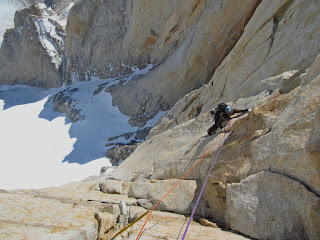 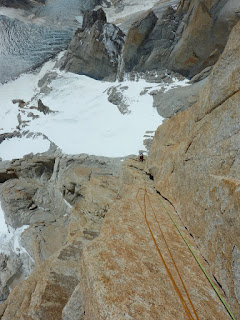 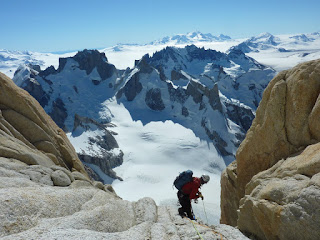 Joel reaching the big ledge and pulling the rope up.
4pm 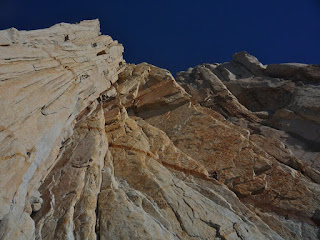 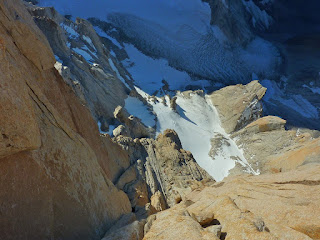 Looking down on the 3-star bivy ledge
7pm 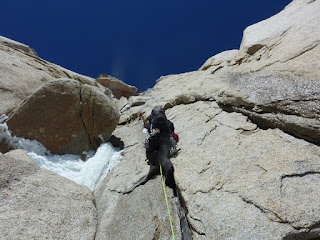 Joel starting the upper Casarotto route on the Fitz Roy headwall the next morning.
11am (way too late) 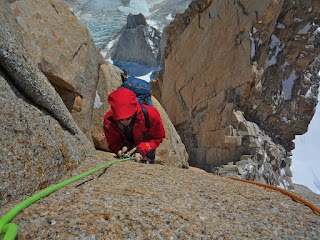 Neil following the last pitch before the bail. We were soaked and very high on Fitz Roy.
(Pilar Norte behind)
1pm 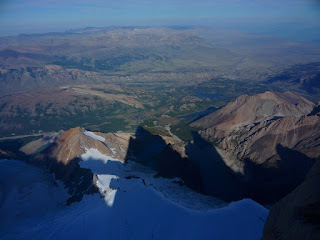 Back on the Pilar North, preparing to rappell
6pm 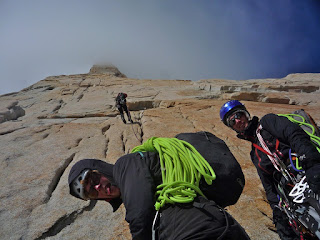 Rappelling Casarotto with the remnants of our green rope, using Jose and Greg's 40m cords
12pm 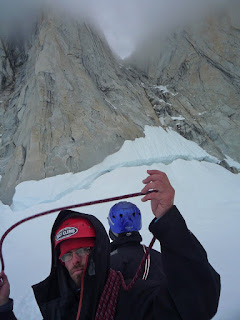 SAFE!
4pm
A full moon lit our way as we climbed up to Paso Cuadrado at 0100 on Saturday, February 19. 22 hours later we were on top of the North Pillar of Fitz Roy, having climbed Rolo and Bean's line on the right side.
Neil crushed the first lead block which included 16 pitches of crack climbing up to 5.11 (7a). We passed two parties along the way and the third at the "3-star" bivy ledge where my lead block started. Between 5 and 11pm, I led cracks that started in immaculate corners. As darkness caught us, we were still a few pitches from the top of the pillar. As the angle eased, we entered chossy and wet weaknesses. After 9 pitches, we found a small place to pass the night on top the pillar.
The next morning I heard singing... Was I hallucinating? No!! It was Nico and Sean topping out the East Face. We were inspired! Going for the top of Fitz Roy, we found increasing amounts of water melting off the rime ice. What began as slightly annoying, totally drenched us and threatened us with hypothermia.
We rappelled with nearly numb hands and found a ledge to dry out. A couple steep pitches and a core shot rope brought us back to the top of the pillar. We began rappelling the Casarotto route around 3pm. Our orange half-rope was soon stuck behind flakes and we cut it. At this point, there were four of us rapping on two 40 meter sections of rope...
The Casarotto is equipped for 60 meter raps and we found ourselves building every other anchor. Fortunately, we had lots of extra sections of rope to build with (after chopping three ropes). Around 11pm we were stopped by high winds as we became exposed to the prevailing Westerly. At this point, we decided to bivy on a 2ft. by 8ft. ledge that had ice for water (we carried one jetboil). The night passed with Los Hermanos holding each other to keep warm and constantly shifting positions as limbs went numb.
The next morning we rapped over the jammed block and into a gully of loose rock and running water. We avoided spontaneous rockfall by moving lookers right onto a rock rib and eventually onto the slabs below the Pillar proper. The last rap over the huge shrund brought much needed relief!!! We were back in Piedra Negra where our tent and food awaited a couple hours later.
We will be Stateside in a couple days. It's sunny in Bariloche and we're headed out for a day of sport climbing. Ciao!
Posted by Neil Kauffman at 7:20 AM

Coming down from Fitz Roy some pounds lighter has been a lot of a help for my sport climbing! Very cool.

If you come to Santiago de Chile don't hesitate in contacting me. There is plenty of good climbing to do here, all year round.

Ps: do you have Silvia Vidal email?

Kauffmans: Nice work. Looks amazing. What am I doing in the Hemisphere again? Oh yeah, power skiing, dammit. Keep em comin' and remember, 40 GU packets and a liter of water. Neil: Your car is intact at Zoe and Bobs, FYI. LOVE